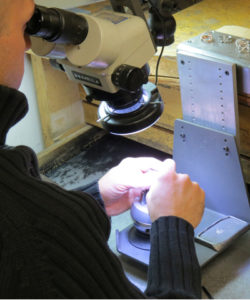 Founder, Robert Tasiyan, entered the trade of diamond setting at age 15. Having worked seven years as an apprentice for a respected diamond setter in his native country of Turkey, Robert embraced the labor of stone setting while quickly learning the art of jewelry design. As he continued to sharpen his skills, Robert soon found himself taking on more independent projects while working alongside his mentor and friend. Inspired by new ventures and opportunities, Robert decided to leave his native city of Istanbul for the United States in 1995. Soon after settling in New Jersey, Robert opened his business in New York City’s Diamond District in 1997.

In 2014, Tasiyan Jewelry Design, a subsidiary company to Faith Diamond Setting, was opened to facilitate the company’s move to reach a larger market through online sales and distribution of predesigned jewelry.